A lot of time is spent dissecting every move in the stock market. With an educated guess, I suspect the total amount of air-time spent by financial news outlets that is dedicated to stocks and their performance would be nearly 90%. There is always something to talk about! Stock returns are more volatile and are easier to understand in many regards.

But I think it is important to spend some time on that other major asset class – fixed income. Truthfully, fixed income is an important piece of most client accounts and doesn’t always get the attention it deserves. I hope to explain what is going on in the fixed income markets (from a high level) and discuss how we have been investing in this asset class as a result. 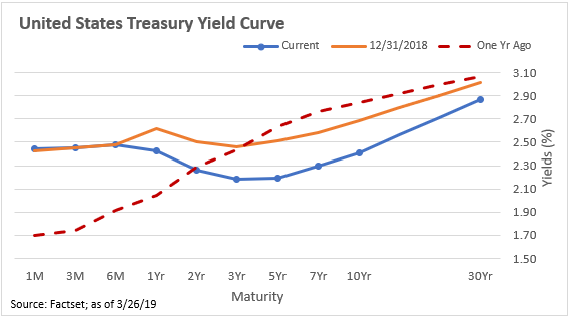 For those of you who are actively watching CNBC or any of the other investment news outlets, you have undoubtedly heard about the yield curve inversion. Many pundits decree it is the beginning of the end of the US’s long-standing economic growth, citing timelines within the next year or two. Don’t forget that fear sells!

But what does “yield curve inversion” mean? An inverted yield curve is most commonly defined as when the federal funds rate, which currently stands at 2.41%, has a higher interest rate than the 10-Year Treasury, which currently sits around 2.39%. The inversion is a whopping 2 basis points, or 0.02%. It would be hard to classify that as a meaningful inversion. The federal funds rate is set, within a range, by the Federal Reserve while the 10-Year Treasury bond yield is determined by market forces.

What are the implications of this inversion? Well, it can mean a lot of things depending on who you ask. The only thing we know for certain right now is that you can lend money at a 2.41% annual rate for one night or you can lend money to the US Treasury at a 2.39% annual rate for the next ten years. Why would you choose to lend money for a longer period and at more of a risk? That doesn’t seem natural, but it is what’s happening right now. The other implication of an inverted yield curve is that the inversion can be a strong signal of a future recession. The hit rate is not 100%, but there is a high correlation between the two. There are plenty of people in the financial news that are arguing why there will be a recession. At the same time, there are also plenty of people arguing why there won’t be a recession. I can address that question later, if needed. For now, I encourage you to review Frank’s most recent commentary on the economics surrounding the inversion and our views on its implications for the market. Hint – we don’t see a real need to raise a red flag at this point, but we are monitoring the situation closely.

What I do want to discuss is how the current yield curve movements influenced our investment positioning in fixed income. Many of you may recall that last April we initiated a full rebalance of all accounts. The main reason for that rebalance was to reduce any equity positions that had moved higher than the original investment allocation target. As a result, we had money that would be moving into fixed income. So, as a part of that process, we redefined our allocation within fixed income. Essentially, we moved a large percentage of our fixed income investment dollars to high-quality, short-term bonds. We continued this shift through the remainder of 2018.

This shift was predicated on a general belief that interest rates would move higher. As interest rates move higher, the value of fixed income securities decreases. We were confident that the Federal Reserve was going to keep raising short-term rates last year, and that is exactly what they did. By investing heavily in short-term bonds, we were able to reinvest more frequently into higher yielding securities, capturing this increase in yields and producing a positive investment return. This worked just as we hoped through November. Short-term bonds were generating positive, albeit low, returns, while long-term bonds were generating negative rates of return.

In December 2018 and throughout the first quarter of 2019, the reverse has happened. As the chart depicts, the decline in rates since 12/31/18 has created upward price movements (orange moving down to the blue line). Short-term rate increases were put on hold for 2019 by the Federal Reserve in December as well. As a result, short-term bonds have continued to generate a low, but positive rate of return while long-term bonds have seen relatively strong returns, up 2.7% year-to-date.

We don’t have plans to change our investment position in fixed income at this time. We expect, at some point, for rates to move higher. We also expect to adjust our positioning once that has happened. In the meantime, we are happy to get a similar yield to the more risky, relatively more volatile long-term bonds. Do we feel that fixed income is going to be a source of investment returns? No. We see fixed income as an efficient way to manage overall portfolio volatility, while generating returns that should outpace inflation.

© 2019 Mastrapasqua Asset Management, Inc. All rights reserved.
The information and opinions contained in this report should not be treated as fact or as insight that will produce desired investment results over time. Investment conclusions always bear risk, and that risk may not be reasonable for any particular reader. Obviously the writer, even assuming good intentions, does not know of the reader’s particular financial circumstance and therefore is not able to assess the propriety of whether a named security makes sense as part of a given individual, family, or institutional portfolio. Mastrapasqua Asset Management clients may, from time to time, own some of the companies mentioned. We hold out no duty to give readers of this column advanced notification of when we may change an opinion. To our knowledge, none of the information contained in our column would, when it becomes publicly available, have an influence on the valuation of a particular stock. Investors should receive investment advice based on an assessment of their own particular investment circumstances and not on the basis of recommendations in this report. Past performance is not indicative of future returns.

A Policy Change: Rates Are No Longer A ThreatComments
How Quickly Things ChangeComments